Who wants that perfect love story anyway?………………………… I think most people want to find love whether they want to admit it or not. We want to find our better half, a companion, someone to experience the highs and lows of life with, and someone that will add more happiness to our lives. But what exactly is love? Is love a feeling, a choice, or an action? Is it a combination of the three? How much does love play a part in making a relationship or marriage last? Love is just a four letter word but it has so much depth. I reached out to several men and women to get their opinions on love. Some were married, single, in relationships, divorced and remarried so they all offered diverse and interesting perspectives.

I had a conversation with a coworker a while back about what it meant to love another person and he told me the only woman he truly loved was his ex-girlfriend. I asked him why he loved her and he started listing things that she did for him like cooking, cleaning, giving him massages and bathing him. Oh and let me not forget to mention that her English was limited so she barely communicated, which meant he did the majority of the talking in the relationship. I couldn’t help but to laugh and question whether he actually loved her or did he love what she was doing for him. The men that I cared about the most in my life were the ones that did the least for me in terms of giving me material things. I was more drawn to personality, the connection, communication, and how they made me feel or what they were able to bring out of me. I guess you have to ask yourself if a person stopped doing certain “tangible” things would the love remain?

“I think the things you do is more so the expression of love. I don’t think you can rely only on what someone does for you to tell if they love you though. But it’s a good way to show you care.” ~JD

I think most people including myself think or at one point thought of love and marriage as having butterflies, passion, and being on an endless high. For some people love might be those things, but how long will that sustain a marriage or a relationship? What happens when that wears off? What happens when the relationship hits a roadblock? I remember having a conversation with a friend about not having passion in my relationship. We were both talking about the men we were dating at the time and I told her I wasn’t crazy about the guy that I was dating. I complained about how he annoyed me the majority of the time, how we didn’t have a deep connection or strong communication, but on the other hand he was a good person and he treated me right. She told me in the past she based choosing a potential man off of those same factors but found that most of the men she felt “passionate” about were not right for her or they didn’t share the same feelings. My relationship ended a few months later and the guy she was dating at that time ended up proposing a week after our conversation. That was the first time I questioned if my idea of love was unrealistic. (Update: That friend is now divorced).

I think many people imagine a special person walking into their life who will complement their personality so well that they will be perfect together. The truth of the matter is that love sometimes doesn’t happen instantly; it tends to develop over time. Everyone you meet is going to have flaws but being able to accept or look past a person’s flaws and love them despite is the key. In my mind the perfect guy for me would be a combination of Lance Gross, Morris Chestnut, Idris Elba, Hill Harper, Michael Ealy, Malcom X, Don Cheadle, Jamie Foxx, Big Krit, Denzel Washington and the list goes on. I’m fully aware that I will not meet a man that will have every single quality that I desire, and I know I won’t have every quality that some men might desire. I don’t think anyone should settle when it comes to love but at the same time you need to have realistic expectations. Television tends to glamorize love, marriage, and relationships without acknowledging the hard work that goes on behind the scenes to make it work.

In the Toni Braxton Lifetime movie, there was a scene where Toni and her husband got into an argument because he was feeling overwhelmed by having to help her out so much. She had a heart attack and the doctor advised her to stay in the bed for a few months until her health improved. Her husband had to take over all of their responsibilities, take care of their kids, and try to cover all of their expenses while focusing on his singing career all at the same time. It took a toll on their marriage and although they loved each other, love wasn’t enough to keep them together. From the feedback I received from the married individuals I learned that your heart isn’t going to skip a beat every time you see that other person and you can’t let how you feel define the relationship because feelings change constantly.

“Having been married before, I would say that no one should expect perfection. Marriage is about a relationship, respect, responsibility, and ultimately building a life with someone. The person you will marry will not be perfect, but you also need to accept that you’re not going to be perfect either. Accept that both of you will have flaws but that’s why communication is so important in a relationship as well” ~DR

My parents have been married over 30 years and I know without a doubt love is not what kept them together all of these years. They are two people that chose to stay committed to one another throughout the ups and downs of their relationship. I haven’t decided whether or not I want to get married because marriage isn’t easy and everyone isn’t equipped to handle it. I fear not being a good wife, I fear falling out of love, I fear not knowing how to be fully committed to another person, I fear losing myself in another person, and I fear the marriage failing. Love is a gamble and relationships and marriage require two committed people to make it work. I think people get excited about the idea of marriage not fully comprehending how much goes into making it last. I learned from the people I interviewed that lasting relationships take sacrifice, commitment, compromise, and being unselfish.

“Marriage is a business. Has to be based off love but it’s a real deal commitment and a lot of people underestimate it.“ ~EW

“It’s about balance. No one is perfect. I say that with respect to having flaws. It’s about being complementary. We are people, not robots. No one is exactly alike, so really a flaw isn’t necessarily a flaw. It’s just a way of how someone may identify themselves.” ~UO 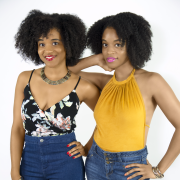 Twin sisters and Mississippi natives Ashley E. and Amy Nicole decided they didn’t want to settle for working an unfulfilling 8 to 5 job for the rest of their lives so they set out on a journey to pursue their passions. They combined their writing talents and love for music and film which resulted in the creation of “The Double Scoop.”

What Will Your Legacy Be?